Tennis
Andy Murray trailed throughout in his first ATP Tour final since winning in Antwerp in October 2019; Top seed Aslan Karatsev – who beat Dan Evans to reach the final – impressed against to register a 6-3 6-3 victory in Sydney

Andy Murray missed out on a first ATP Tour title since 2019 after falling to a straight-sets defeat against Aslan Karatsev in the final of the Sydney Tennis Classic.

The Scot, a wildcard in the event, put together his best week since his victory in Antwerp in 2019 before falling short in his bid for a 46th career victory.

Murray was largely second-best as he played his fifth match in as many days, with Karatsev taking just over 90 minutes to claim a 6-3, 6-3 victory and make a winning start to the calendar year.

“I’d like to congratulate Aslan [Karatsev] on a fantastic week,” Murray said after his loss. “I know he arrived here late in Australia as he was recovering from Covid, so even more impressive to come back straight away and play at that level.

“I’d like to thank my team for all of their help this week. First time back in the finals for three years, it’s been a long road to get back here but I couldn’t have done it without your help so thank you. I’d also like to thank my family back home, I don’t know if you were watching but I miss you all.”

Murray was broken in the opening game and trailed throughout against Karatsev, who attacked the Scot’s second serve and showcase his powerful baseline game to produce winners from all areas of the court.

Karatsev secured the opening set against serve when Murray made back-to-back double faults, with the Russian also breaking Murray early in the second to take complete control of the contest.

Murray showed glimpses of his old set and put in a valiant fight in the fifth game, lasting 13 minutes, only for Karatsev to weather the storm and survive five break points to move into a 4-1 advantage.

The former world No 1 continued to dig deep to try and force his way back into the match, fighting back from two Championship points down in the ninth to take it to deuce, before Karatsev eventually prevailed to claim the title.

What next for Murray?

Defeat means Murray must wait to make it back into the top 100 but he can head to Melbourne with confidence for the Australian Open and a rematch with Nikoloz Basilashvili – who he beat in the second round this week – on Tuesday. 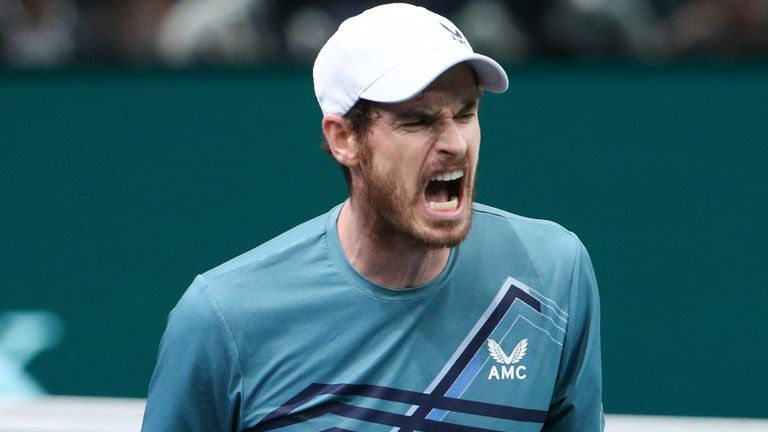 Please use Chrome browser for a more accessible video player

Karatsev was one of the most surprising Grand Slam semi-finalists in history when he reached the last four in Melbourne 12 months ago as an unheralded qualifier, although he will now head into this year’s tournament as a genuine contender.

The 28-year-old has proven he belongs at the sport’s top table, with his Sydney success following titles in Dubai and Moscow last year, with Karatsev now chasing further success when he begins his Australian Open campaign against Spain’s Jaume Munar next week.

There was a title in Adelaide for Britain’s Neal Skupski, who claimed back-to-back pieces of silverware with new Dutch partner Wesley Koolhof.

The men’s singles title went to Australia’s Thanasi Kokkinakis, who has been blighted by injuries in recent years and roared with delight as he claimed his first main tour title in his home city, beating Arthur Rinderknech of France 6-7(6) 7-6 (5) 6-3.

Madison Keys won her first silverware since 2019, thumping Alison Riske 6-1 6-2 in the women’s event, while Karatsev’s victory was preceded by an impressive 6-3 4-6 7-6 (7-4) win for Spain’s Paula Badosa over French Open champion Barbora Krejcikova.