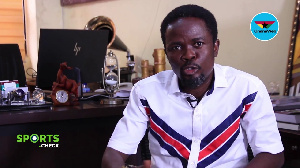 Former spokesperson of the defunct Normalization Committee, Dan Kwaku Yeboah has said that Ghana’s poor performance at the 2021 Africa Cup of Nations can partly be blamed on Dr Kofi Amoah who served as president of the committee.

Kwaku Yeboah on Peace FM’s Kokrokoo program said that the committee had a chance to recommend policies that will ensure drastic changes in football administration but Dr Kofi Amoah kicked against them.

He said that due to Dr Kofi Amoah’s ‘autocratic’ nature, the committee could not execute its work as expected.

He said that had the committee instituted the measures, Ghana football would have been on a different level to where it is now.

Kwaku Yeboah said that until club administrators are banned from standing for positions within the FA and Premier League Board, Ghana football will continue to struggle.

“What we needed to do was to decouple the league organization from the clubs. That no club owner will be made to be FA President or PLB president because their interest is an affront to the development of football. Dr Kofi Amoah was autocratic and did not listen to opinions.

“I witnessed a meeting where Isaac Asiamah urged the committee to seek the input of government before sending it to FIFA. Dr Kofi Amoah addressed him like ‘my nephew, you can’t sit here and micromanage the committee’. Isaac Asiamah was angry. His deputy then also got angry and said the minister cannot be addressed in that manner. It turned into a fight at the meeting. So some of the things we could have done to improve our football, we didn’t and that’s the cause of what we are seeing now.

“In one of our meetings, all members of the committee said that we should go with decision A but he was for decision B. Because the others didn’t agree with him, he boycotted the meeting. He slept at the meeting because the other disagreed with him. I was part of that. We destroyed everything. The measures we should have put in place, we did not. There were so many structures we could have put in place to normalize our football,” he disclosed.

Dan Kwaku Yeboah was part of a panel discussion on Ghana’s shocking exit from the 2021 Africa Cup of Nations.

The Black Stars were dumped out of the tournament after failing to win any of their three Group C matches.

Defeats to Morocco and Comoros and a draw with Gabon ensured that Ghana left the tournament with a paltry one point out of a possible nine.

Per the records, the 2021 AFCON is the worst in Ghana’s history.