The NFL playoffs weren’t just good for Fox and ESPN during the games over the weekend and on Monday night. Chatter around the opening weekend of the playoffs helped drive ESPN and Fox Sports 1’s weekday morning shows to record viewership.

Over on Fox Sports 1, “Skip and Shannon: Undisputed” and Colin Cowherd’s afternoon show “The Herd” each posted their best-ever viewership Monday. “Undisputed” drew 442,000 viewers, while “The Herd” nabbed 290,000 viewers. 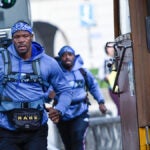 It was a strong weekend for the opening round of the NFL playoffs, led by the San Francisco 49ers’ chaotic win over the Dallas Cowboys in Texas, which drew 41.4 million viewers to CBS and Nickelodeon, the most for a wild card playoff game in seven years.

CBS’ other game (which was only simulcast on Paramount+), between the New England Patriots and the Buffalo Bills drew 26.4 million viewers on Saturday night. That game was never a contest, as the Bills cruised 47-17.

Fox’s Sunday afternoon matchup between the Tampa Bay Buccaneers and Philadelphia Eagles drew 30.3 million viewers. That game was also a no-contest, as Brady’s team raced out to a 31-0 lead and won 31-15.

The Cincinnati Bengals-Las Vegas Raiders matchup that kicked off the weekend on NBC and Peacock drew 27.7 million. NBC/Peacock’s second game of the weekend between the Pittsburgh Steelers and Kansas City Chiefs garnered just under 29 million viewers.