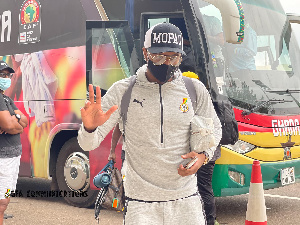 Ghana without a win after two games at the AFCON

The Black Stars of Ghana have departed their base in Yaoundé to Garoua ahead of their last Group C game against Comoros after spending 8 days in Yaounde.

The four-time competition winners will hope to rewrite the script in Garoua after failing to record a single victory in their two games played in Yaounde.

Ghana have had a slow start after losing 1-0 to Morocco and a one-all draw against Gabon in the second game, leaving the West African side on 1 point in the group.

Benjamin Tetteh who has been banned by CAF for three matches after punching a Gabon player joined the trip as well as injured David Abagna.