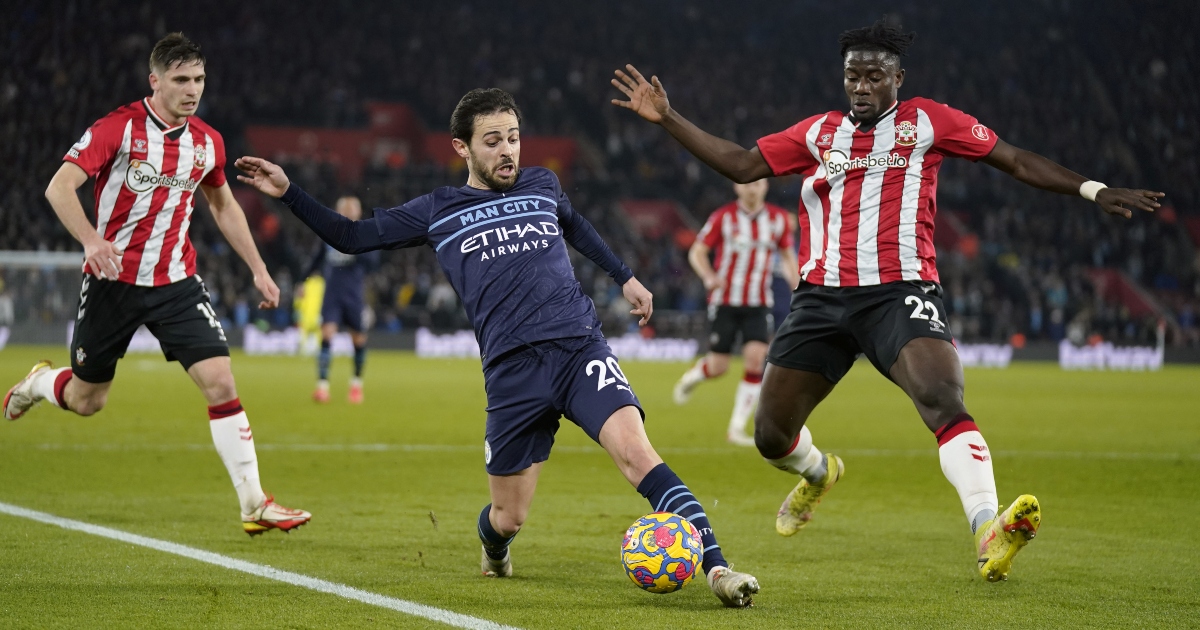 Manchester City extended their lead at the Premier League summit to a dozen points. But Southampton’s stubbornness at St Mary’s may just have kept the champions within Liverpool’s sights.

The Saints toiled to take two more points off City, having already held the runaway leaders this season. The hosts could not meet Ralph Hasenhuttl’s target of 30 per cent possession against Pep Guardiola’s men but there, and one defensive lapse at a set-piece, were the only areas the Saints fell short on Saturday night.

Guardiola will take a dimmer view of City’s performance. Despite emerging from a lethargic start which cost them the opening goal, never did they hit their stride, relying instead on sporadic moments to crack an exceptionally well-drilled Southampton defence.

For all their possession – 74 per cent to be precise – and 47 touches in the home box, Fraser Forster was forced into only four saves. One, in the first half from Raheem Sterling, he should have been allowed no chance to make but the attacker’s profligacy was symptomatic of a performance that Guardiola should use as a stick to swerve future complacency in his squad.

Phil Foden was certainly guilty of that in the opening stages when he accepted responsibility to track Kyle Walker-Peters but failed to take the job seriously. Foden’s lax approach to defending allowed the Saints right-back the chance to score his first Premier League goal with a sublime outside-of-the-foot finish.

City eventually woke from their slumber after a dozy half hour but still they looked weary as attack after attack broke down, usually upon hitting the Saints centre-backs.

Mohammed Salisu particularly was outstanding. The Ghanaian defender has enjoyed a fine season after taking his sweet time to settle at Southampton but Hasenhuttl is seeing the reward for his patience. Salisu has missed only one game this term – a 3-0 defeat at Arsenal last month – and the manager recognised then the stopper’s influence.

“When he comes back, it helps massively because he is a very, very good centre-back,” Hasenhuttl said when seeking a defensive improvement, in one area particularly. “Sometimes we have to defend a little deeper in and around the box. Then we have not been man-orientated enough in the area, and this is what we have to change.”

Sadly for Saints, this flaw was exposed again by City. Having repelled most things chucked at them in open play, Saints switched off on a set-piece from the right delivered by De Bruyne. With Southampton’s centre-backs guarding the central zones, City’s biggest attacking threats converged at the far post, where Walker-Peters, Oriol Romeu and Armando Broja were easy pickings, especially for Laporte, who strolled in unopposed to head home a simple leveller.

Conceding in such a manner may leave Hasenhuttl with a feeling of regret, not that he showed it at the final whistle. Nor should he in the wider context of Saints’ form. At the same stage last season, they sat in the same position – 12th – with four more points, but Southampton this term have a different vibe. Their home form is reliable if not outstanding and more often now than last term, as City have discovered, they are far harder to beat. From that solid platform they can build under Hasenhuttl, especially if the buzz around the recent takeover proves to be justified.

For City, the end of their winning run is no disaster. Twelve consecutive wins and a 12-point advantage sends them into a two-week breather in a position of dominance at the summit, even if Liverpool with two games in hand can cut that lead in half, and half again if they beat the champions at the Etihad in April. Guardiola, though, will doubtless be restless as he begins his break after a sloppy performance that leaves the door slightly ajar for Jurgen Klopp and the chasing Reds.