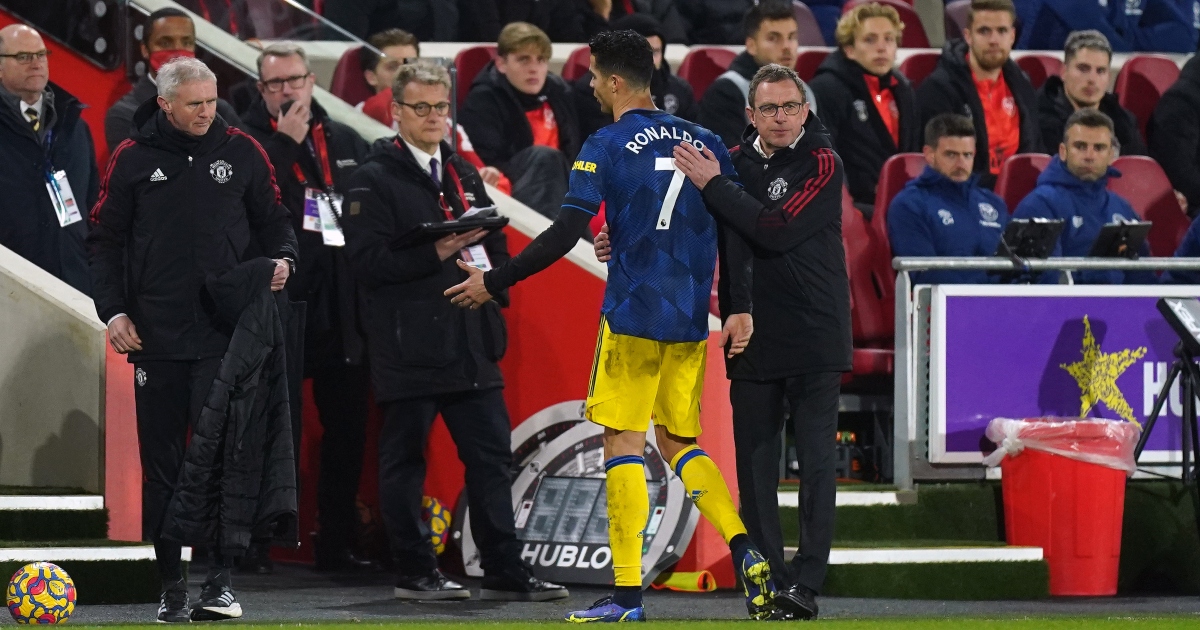 Manchester United boss Ralf Rangnick has revealed that Cristiano Ronaldo asked his ‘why didn’t you take off one of the younger players?’ when he was subbed off against Brentford.

Much has been made of Ronaldo’s reaction with the Portuguese forward visibly frustrated by his manager’s decision to sub him off.

Speaking to the media ahead of United clash with West Ham, Rangnick was quick to play down the incident but revealed that Ronaldo had questioned his decision to leave younger players on.

“Well, I think we shouldn’t make too much of a fuss out of it. I can only speak for myself and my coaching staff. I explained that to him during the game, we had a little conversation after we score the third goal,” said the United boss.

“In fact, I told him the same as what I said in our press conference. The job of a football manager is to help the team win the game and it was clear from our experience at Villa Park that this time we have to do things better.

“We did it better and the only question was, who do we take off? Of course, Cristiano is a prolific goalscorer and he’s a player that will always want to play and score goals. He was also asking why me ‘why didn’t you take off one of the younger players?’.

Rangnick continued by adding that the decision to sub Ronaldo for defender Harry Maguire was a result of United dropping points from a  similar position against Aston Villa days earlier.

“In some parts of the game, you are dominating the game, pinning the other team back, and all of sudden it can be different. Therefore it is important to be able to react to what the game needs now, to what the team needs and we had exactly the same decision at Brentford as at Villa, 70 minutes played, 2-0 up against a team who does not give up.

“Therefore for me it was logical with the negative experience we had at Villa Park to do it differently this time and it was clear we bring on Harry [Maguire] and then defend this 2-0 result and in the end we even scored a third one on the counter-attack and it was clear we were going to win the game.”